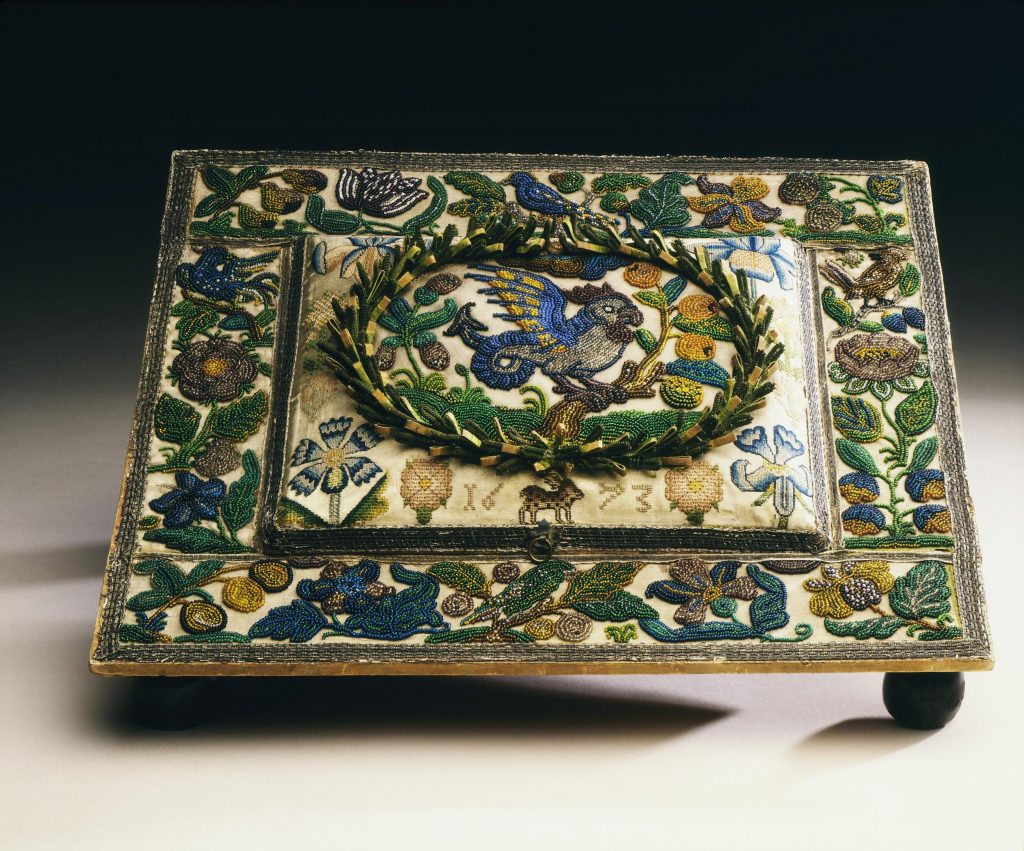 This jewellery case is decorated with beadwork, a popular embroidery technique in the 17th century, in which tiny glass beads were threaded in sequence and sewn into place. The padded central panel lifts open to show a compartment for jewellery, lined with pink taffeta. The quality of glass beads and other material, and the involvement of a cabinet-maker in making the beadwork up into such a box, would mean that it could only be made within a household which could afford such outlay. Being such an intricate and relatively precious thing, the case’s owners (Martha and her successors) would have handled it very gently; thus it remains in good condition today.

People
Martha Edlin (1660-1725) worked a series of embroideries during her childhood, including this jewellery case, which were cherished by her descendants and passed down through the female line in her family for over 300 years. We know little about her life, except that she married a man called Richard Richmond and appears to have been a prosperous widow living in Pinner in Greater London at the time she drew up her will, with daughters and grandchildren.

Materials & Making
Following the usual development of needlework skills in a young educated girl in the mid-17th century, Martha Edlin embroidered a sampler in coloured silks at the age of eight, and a more complicated piece in whitework and cutwork at nine. By 1671, her eleventh year, she had embroidered the panels of an elaborate casket, and two years later this beadwork jewellery case. The needlework skills she demonstrated in these pieces would be important attributes in her adulthood, in the management of her household and the making, mending and decoration of her own and her family’s clothes.

Wooden jewellery case covered with embroidered silk with coloured silks, metal purl and glass beads. Takes the form of a recessed compartment with a padded hinged lid with a tiny lifting ring, and a wide flat surrounding frame, and it stands on four feet. The inside of the case is lined with pink silk and fitted out with slots for jewellery along one side. The outside top surface is covered with white silk satin embroidered with coloured silks and glass beads.

On the lid, surrounded by an oval wreath formed by silk-wrapped leaves of parchment, is a cockatrice in a tree, with flowers around, and worked in glass beads. Outside the wreath are flowers and a leopard worked in silks in tent and rococo stitches, with the name ‘Martha Edlin’ above and the date ‘1673’ below. On the frame surrounding the lid are birds and flowering plants worked in beads.

The corners of the frame rest on four round wooden feet. The underside is lined with marbled paper. The edges and seams are covered with silver braid.

MUCH more info available at:
http://collections.vam.ac.uk/item/O11072/jewellery-case-edlin-martha/
Honestly there is so much info about this piece on that link it would be silly to NOT send you there.
Shire Album # 57 “Beadwork” Pamela Claburn Says:

A cockatrice within a wreath, flowers, and the inscription “Martha Edlin” Dated 1673. Satin embrodered with silk, glass beads and stiffened ribbon; tent and roccoco stitches and couch work. Detail: 12″x14″ (30.5×35.5 cm), Detail of the lid of a embroidered jewel case.”

All copyrights to any photos or text remain the property of their respectful owners and presented here for research purposes only.